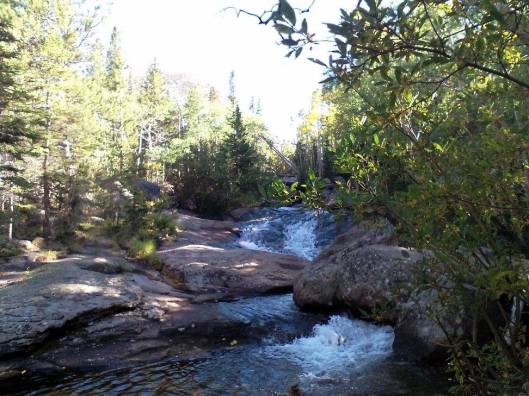 A friend came out for a visit a few weeks ago and we celebrated beautiful weather in Colorado by spending the day in Rocky Mountain National Park.  This day, we turned left rather than heading straight into the park and visited Bear Lake.

My friend is a low lander and made some comments about my state not having enough air.  My family and I plied her with water and warnings not to ignore any feelings of dizziness then, as my friend was game for hiking, headed to the lake.

Bear Lake was well worth the stop.  It’s a beautiful place.  When my friend and I visited, the sun sparkled on the water, the sky was clear overhead, and a pair of ducks sought sustenance.  My friend asked if Bear Lake was called “Bear Lake” because it was shaped like a bear’s paw and I had to tell her I didn’t know.  A bit of research on Google led me to this blog post where I learned that the grandfather of a woman named Sally Ferguson shot at and missed a bear while hunting in the area in 1912 and that’s how the lake earned it’s name.  Now I know.  There’s a great deal of information on the History of Bear Lake in the post: I encourage you to check it out. 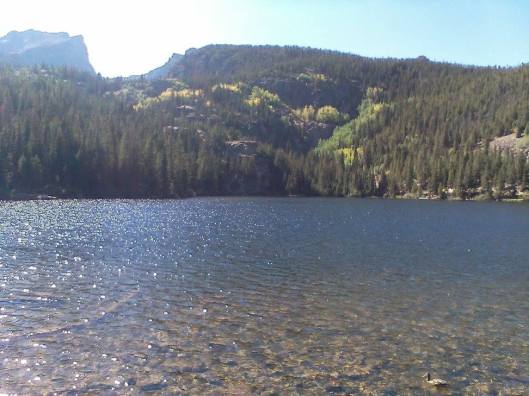 Bear Lake isn’t far from the parking lot so my friend felt up for a hike.  I’ll hike whenever I get the chance so I was chomping at the proverbial bit to get onto a trail.  There’s a lovely walk around the lake but we weren’t far from the trail to Alberta Falls.  My friend said she’d never seen a waterfall before and thought she was up for the hike.  My family was content to entertain themselves and the two of us started off.

Hiking with my friend was an experience I’ll ever forget and probably the most fun hiking I’ve ever had.  The two of us giggled over the fact she was hiking in designer jeans, Pumas and carrying a Coach bag slung over her shoulder.  I looked like I’d crawled out of the bushes by comparison.  We laughed, snapped photos, and took breathing breaks all the way to Alberta Falls.

I resorted to Google again to satisfy  my own curiosity about the naming of Alberta Falls and found I liked this website best.  The hike isn’t difficult.  There is an increase in elevation once Bear Lake is left but the incline isn’t ever too intense and the trail is well maintained.  There are bridges that add some fun to a basic trail and stones to prevent tumbling head long into a ravine.  (I had to be kept from falling to my death in search of a photo; my friend is much more level-headed)  The hike up to the falls took about an hour and, when we finally reached them, my friend said the hike was well worth it.  She rested for a bit while I had a grand time crawling around on rocks in search of the best waterfall picture.

It was a glorious day.  Not only did we see two beautiful spots but my friend got a stamp in her National Parks book and I purchased a book of my own: a history of women settlers in the area now in my stack to read.  I’ll be hard pressed to top it when next my friend visits.

It isn’t possible to find a bad view in Rocky Mountain National Park but, if you get a chance to visit, check out Bear Lake and take the time to hike to the Falls.  Both places are beautiful and not difficult to reach.  I found them both to be accessible by all fitness levels.  Come to Colorado and decide for yourself!

END_OF_DOCUMENT_TOKEN_TO_BE_REPLACED

Heart of The Father